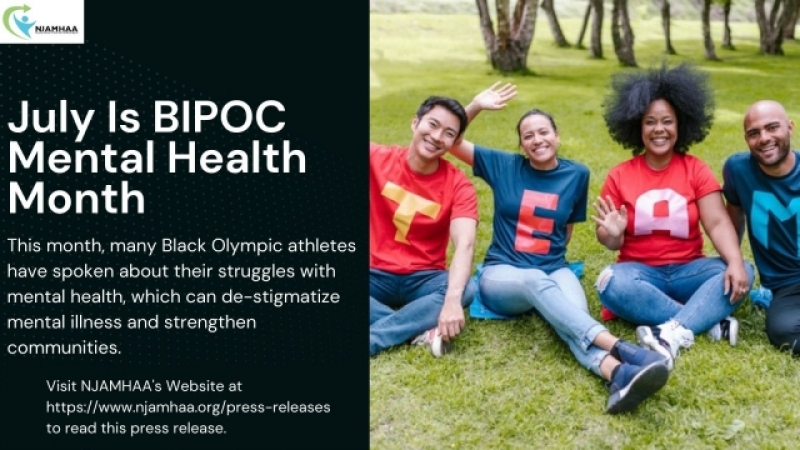 While the Olympics are well underway in Tokyo, many Black athletes from the United States are bringing attention to their mental health. Gymnast Simone Biles, who is also a mental health advocate, said that she has been focusing on her mental wellbeing and practicing self-care, which was previously lacking from her routine. She also opened up about seeing a psychologist once every two weeks and that she is taking medication for her anxiety following experiencing sexual abuse from former USA Gymnastics physician Larry Nasser, the COVID-19 pandemic and social justice movements. Biles recently announced that she will not complete in the all-around final so she could focus on her mental health. Last year, sprinter Noah Lyles shared on Twitter that he was taking antidepressants and that it was "one of the best decisions [that he] made in a while." These individuals speaking out about their mental health coincides with Bebe Moore Campbell National Minority Mental Health Awareness Month, which is also known as Black, Indigenous and People of Color (BIPOC) Mental Health Month, and highlights the unique struggles that racial and minority communities face regarding mental illness.

In addition to Biles and Lyles, Olympic gold medal-winning swimmer and team co-captain Simone Manuel spoke about her diagnosis of overtraining syndrome and struggles with depression, anxiety, insomnia and loss of appetite. Earlier this year, tennis star Naomi Osaka, who is participating in the Olympics, withdrew from the French Open and Wimbledon to focus on her mental health. Sha'Carri Richardson, who won the women's 100-meter race at the Olympic trials in June, was prohibited from participating in the Olympic Games because she tested positive for marijuana, which she said she used to cope with the death of her biological mother. USA Track and Field made a statement saying that they would work with Sha'Carri to "ensure [that] she has ample resources to overcome mental health challenges now and in the future." When a person uses cannabis, tetrahydrocannabinol (THC) alters how the brain's hippocampus processes information and forms memories. This cognitive impairment can not only result in structural and functional changes in the brain, but it can also create a sense of escape for individuals experiencing stress or trauma.

Experts say that mental health issues are not uncommon among Black athletes, and this group is more willing to speak openly about the struggles and publicly advocate for better care. Their advocacy lends itself to BIPOC Mental Health Month. The goal of this month, according to the U.S. Department of Health and Human Services (HHS), is to bring attention to the struggles that different races and ethnic minorities face and how it is harder for these individuals to access mental health and substance-use treatment services. This inaccessibility is reflected in statistics related to Black Americans and mental health. Data from the HHS states that suicide was the second leading cause of death for Black Americans between the ages of 15 and 24 years. In 2019, Black females in grades nine through 12 were 60 percent more likely to attempt suicide compared to non-Hispanic females in the same age range.

"In 2008, the United States House of Representatives declared that July was Bebe Moore Campbell National Minority Mental Health Awareness Month. The goal of this resolution is to improve access to mental health treatment and services and promote the effectiveness of mental health care and enhance public awareness of mental illness in minority communities. As Ms. Campbell said, a 'national campaign is needed to destigmatize illness', especially one targeted toward minority communities. In order to achieve this goal, it is essential that behavioral healthcare providers create culturally competent plans to provide considerate and inclusive services for all individuals from all walks of life. It will allow for treatment to become more accessible and provide individuals with the services that they need," said Debra L. Wentz, PhD, President and CEO of the New Jersey Association of Mental Health and Addiction Agencies, Inc.

Part of destigmatizing mental illness is to ensure that nobody feels alone in the struggles that they experience. That is why it is important when noteworthy figures, such as Olympic athletes, speak about their struggles with mental illness. It combats stigma and lets individuals, especially BIPOC individuals, know that they are not alone in their mental health journeys. It is also important for behavioral healthcare providers to provide culturally competent services to provide more impactful treatment.